Thiago Silva Chelsea player is considered one of the best defenders in the world with a wealth of experience. He won silverware in many countries at the international level with a long list of individual honors and achievements.

Being blessed with talent and strength, the legendary defender proved that he is a formidable opponent on the ground. Everyone also calls him ‘The Monster’. At the age of 37, the Brazilian continues to defy the rigors of time, creating passes that show the toughness and agility only found in the twenties players.

To make sure you don’t miss any interesting information about Silva, let’s keep scrolling! How old is Thiago Silva Chelsea?

On 28 August 2020, the talented defender joined the Blues. He made his debut for the club on 23 September, then won the UEFA Champions League in his first season there. He’s now being an important member of Chelsea FC players.

The Chelsea player has number 6. Silva’s height is 6 feet, equivalent to 183cm while his weight is 79kg.

The Brazilian footballer is currently playing as a center-back for Premier League The Blues. He is also the captain of the Brazil national team. His performances at Chelsea drew praise from both his team management and fans. So, he was rated one of the best central defenders in the world.

On 28 August 2020, the 37-year-old defender joined the Blues and his contract will be expired in one year.  In June 2021, the Blues announced to keep him one more year at the club until June 2022. However, Silva continuously signed another new one-year contract until the end of the 2022–23 season. This information was confirmed!

However, you need to know that most celebrities tend to keep the following figures undercover. It is hard to figure out the exact number. The defender started his football career in the Brazilian amateur leagues and had an incredible move to Juventude at the age of 20.  He signed for Porto in 2004 but missed the entire season due to a life-threatening illness for 6 months in Russia. He then returned to Fluminense and fully recovered there.

In 2009, the legendary defender agreed to a move to AC Milan for a reported fee of €10 million on a four-year contract. And he also helped the club win the Serie A title there. In 2012, the Brazilian footballer became the most expensive defender with a €42M contract at Paris Saint-Germain.

The defender left PSG and signed a one-year deal on a free transfer at The Blue club in 2020. The club then officially confirmed that Silva has signed a new deal till 2021. And the contract keeps extended till the end of the 2022–23 season but they didn’t share the transfer fee in 2022. What disease did Silva have?

Along his career journey, the young defender was diagnosed with chronic Tuberculosis, a life-threatening illness. The Brazillian international defender was hospitalized for six months in Russia. His condition was so bad that his fans thought he couldn’t make it.

Fortunately, the legendary defender strongly overcame it but had to temporarily quit professional football. He then was offered a return to Fluminense where he fully recovered.

Who is Silva Chelsea dating? Not only the football schedule, but his fans also care about his relationship. In fact, our talented defender is off the market.

Thiago Silva wife is Isabelle. She is a model and a positive influence on Instagram. The defender started dating his wife in the early 2000s. Their relationship has developed over the years and they decided to get married in May 2005. She always shows her love in the role of a supporter and a responsible wife.

Why did Dave write a song about Thiago Silva Chelsea?

Dave and AJ Tracey made a song called “Thiago Silva” three years ago. When it comes to the reason behind the song, Tracey said:

“When I and Dave made that song, we were quite a bit younger, Dave was really a baby, and we just wanted the football world to acknowledge us.”

The lyrics that Dave references the defender in his song:

“I one-two rap, she don’t give hat
Thiago Silva, man block, then skeet”

After Dave performed this song on stage at Glastonbury, the Brazilian defender finally acknowledged the track. The defender even tagged Dave too, and he was pretty confused to get a reply from the defender.

Silva currently only uses two social networking platforms, Instagram and Twitter. To update his status and activities every day, you can follow his two social accounts below.

That concluded our thorough blog post on Thiago Silva Chelsea. Hopefully, you will enjoy it, and please ask any further questions in the comment section.

Remember to stay tuned to update more information about your favorite footballers on our website Chelsea FC players! 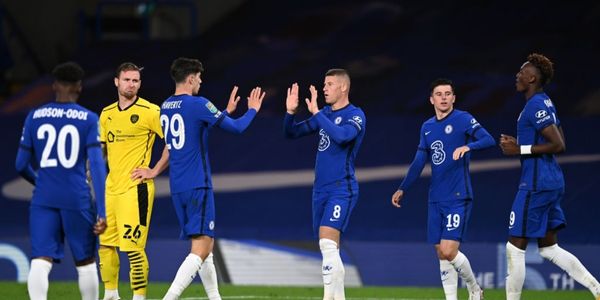